Gary Deutchman Katrinka asked `Question Can you outgrow scoliosis? My daughter is 8 years old and currently in a Charlenston Bending brace.` 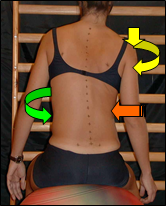 Dear Katrinka,
I assume that your daughter has a scoliosis curve between 25 and 40 Degrees. Statistically her curve will progress without scoliosis therapy. I would recommend contacting Us directly at 1-800-281-5010 to discuss her situation.
Sincerely,
Dr. Deutchman

Gary Deutchman Virginia asked `How do I deal with the constant pain?`

Dear Virginia,
I have seen hundreds of adults with pain from their scoliosis become pain free with right combination of Spinecor Bracing, Schroth exercise and Chiropractic care for scoliosis. Feel free to contact me directly to disCuss your situation.
Sincerely,
Dr. Deutchman

Dear Neitzel,
Scoliosis progresss more during growth spurts. Are you going to be using the Spinecor Brace?
Sincerely,
Dr. Deutchman

Gary Deutchman Maureen Janson asked `I would like to know more about how you incorporate Schroth method into your work, and where you are located. I would also appreciate the Parents Guide to Scoliosis, to share with parents of my dance students who demonstrate classic symptoms of the presence of scoliosis. Thank you.`

December 7 at 8:01pm
via http://www.facebook.com/ScoliosisCareFoundation

Maureen: You can download the Parents Guide to Scoliosis for free Here

Scoliosis is the result of small genetic faults in symmetrical growth.  The earlier intervention is offered the greater the opportunity to reduce the abnormal forces which ultimately exacerbate the abnormal growth pattern seen in scoliosis.  Research published in 2006 by Hawes et al agrees earlier intervention is the key to correction.  Published in the Journal Scoliosis Journal. Hawes and O’brien concluded,

“Spinal curvatures can routinely be diagnosed in early stages, before pathological deformity of the vertebral elements is induced in response to asymmetric loading. Current clinical approaches involve ‘watching and waiting’ while mild reversible spinal curvatures develop into spinal deformities with potential to cause symptoms throughout life. Research to define patient-specific mechanics of spinal loading may allow quantification of a critical threshold at which curvature establishment and progression become inevitable, and thereby yield strategies to prevent development of spinal deformity.”

The breakthrough of the Spinecor system is in its design to retrain movement and reduce the abnormal forces during movement. Retraining of posture and movement is a consequence of the adaptability of the “central pattern generators” which control postural muscle activity. In research published in SPINE (2004) researchers concluded changes in muscle recruitment patterns can serve to reduce the severity and progressive nature of scoliosis.

Why does the Scoliosis ribcage become deformed, and can it be limited?

What is Scoliosis Brain Lateralization?

In a study published in SPINE 1995, researchers tested linguistic processing, a higher cortical function, and concluded children with scoliosis had an entire brain dominance lateralized to one side, unlike unaffected children in the control group. This study demonstrates the need for advanced neuro-diagnostic testing and clinical correlations which leads to meaningful neurologically based rehabilitation.

What factors influence the spinal curvature in scoliosis?

Researchers believe a genetic disturbance in the initiation sequence of growth is the primary dysfunction in Idiopathic Scoliosis.  Growth centers in the anterior portion of the vertebrae are thought to grow faster than those in the posterior regions, thereby causing a flattening of the normal side (sagital) curves.  Further delay in lateral growth centers leads to buckling and a wedging of the bones at the apex of the resultant curvature.  Muscle spindles are known to be abnormal and potentially absent at the level of the apex further compounding the problem.  Reduced spindle numbers means reduced awareness and motor control of the surrounding musculature, all leading to brain lateralization affecting much more than postural tone.

Can Scoliosis exercises help reduce the deformity associated with Scoliosis?

Researchers from Europe and the United States have published literature which supports the use of exercise and other physiotherapy to reduce the deformity associated with Scoliosis. Specific breathing exercises as well as resistance and postural re-education based exercises can be prescribed to reduce the neuro-musculature imbalance associated with scoliosis. Scoliosis Systems (TM) utilizes the Corrective Exercise Continuum as taught by the National Association of Sports Medicine (NASM). See illustrated below.

How can the body’s innate reflexes help to reduce the Scoliosis curvature?

Normal body posture is maintained via a natural balance between the proprioceptive systems (dorsal columns of the spinal cord and muscle spindles), the vestibular system (inner ear and brain) and the visual system.  Research confirms both children and adults with scoliosis have abnormalities in all of these systems in varying degrees. It is therefore important to evaluate each patient individually to determine which, if any of these systems are potentially lending to the progressive nature of their scoliosis. In the event an imbalance is identified, certain procedures and exercises can be prescribed which are designed to improve the systems in question.

Patients with scoliosis are known to have neurological dysfunction which contributes to the progressive nature of scoliosis, as well as interfering with the rehabilitation of posture in the adult and child.  Studies have identified an increased incidence of brainstem and cerebellar abnormalities such as brainstem hypoplasia and Arnold Chiari Malformation in patients with Scoliosis. Certain findings such as cervical lordosis, thoracic kyphosis, abnormal Somatosensory evoked potentials (SSEP) and nystagmus on electronystagmographic testing have been linked to neurogenic causes of scoliosis. In the event neurological dysfunction is identified, MRI imaging may be necessary.  Other interventions may include neuromuscular rehabilitation which can be offered on an individual basis. Vestibular and oculomotor dysfunction has been shown to respond to personalized treatment programs, which are designed to re-educate the brain perception of subjective postural vertical.

Do you use chiropractic care in every case?

In cases of adult scoliosis, bending radiographs and functional assessments can be helpful in identifying areas of spinal subluxation which can lead to arthritic changes in the spine as well as proprioceptive and muscular imbalances. These conditions require specialized chiropractic adjustments or physiotherapy procedures to improve range of motion and the normal coupling in spinal mechanics. In cases of adolescent or juvenile scoliosis, chiropractic may be appropriate to increase the frequency of firing of certain neural pathways. Each patient is evaluated on and individual basis and recommendations are made accordingly.

Do you take bending x-rays on children as well as adults?

Bending radiographs are utilized to determine the beginning and the end of certain curvatures, as well as to assess the relative flexibility of the curvatures.  Although rare, if there is a clinical necessity, bending films may be taken on either children or adults.

Why do you recommend myofascial release technique be performed on the muscles of the concavity?

Physiotherapy techniques have been successfully utilized in scoliosis treatment for the past sixty years. Myofascial Release Technique (MRT) is designed to neurologically inhibit the connective tissues which become fibrotic when a muscle is in a shortened state for a prolonged period of time, thereby preparing the muscle to be lengthened.

Why do you discourage slow stretching of the concavity musculature?

What involvement do platelets have in Scoliosis?

Blood platelets have been found to be abnormal in children with scoliosis.  It is believed that the similarities between platelets and muscle spindles as contractile proteins makes them susceptible to genetic influences present in Idiopathic Scoliosis. In a study performed by Dr. Lowe at the University of Nottingham, platelet changes were linked to paraspinous muscle activity in children with Scoliosis.

Can adult pain syndromes be related to the brain?

We compared brain morphology of 26 chronic back pain (CBP) patients to matched control subjects, using magnetic resonance imaging brain scan data and automated analysis techniques. CBP patientswere divided into neuropathic, exhibiting pain because of sciatic nerve damage, and non-neuropathic groups. Pain-related characteristics were correlated to morphometric measures. Neocortical gray mattervolume was compared after skull normalization. Patients with CBP showed 5-11% less neocortical gray matter volume than controlsubjects. The magnitude of this decrease is equivalent to the gray matter volume lost in 10-20 years of normal aging. The decreased volume was related to pain duration, indicating a 1.3 cm3 loss of gray matter for every year of chronic pain. Regional gray matter density in 17 CBP patients was compared with matched controls using voxel-based morphometry and nonparametric statistics. Gray matter density was reduced in bilateral dorsolateral prefrontal cortex and right thalamus and was strongly related to pain characteristics in a pattern distinct for neuropathic and non-neuropathic CBP. Our results imply that CBP is accompanied by brain atrophy and suggest that the pathophysiology of chronic pain includes thalamocortical processes.

Why do you use Russian Stimulation on the muscles of the convexity?

Studies confirm the muscles of the convexity undergo atrophy due to disuse. Electrical stimulation at a frequency of 2500hz has been successfully used to create muscle contraction and ultimately muscle hypertrophy in denervated or under used musculature. Proprioceptive activation is another benefit leading to increased somatotopic representations of the deformed area of the trunk and thorax.

Do you have any Athletes under your care?

Our patients include an Olympic Skier, competitive gymnasts, a Champion Golfer, an ice skater, and many ballerinas, all who are able to continue to practice and compete in their sports while wearing our brace.

Do you accept non-traditional cases?

Why do you treat mild scoliosis?, I’ve been told it won’t harm me.

Barrios and coworkers recently demonstrated, for the first time, that patients with mild and moderate idiopathic scoliosis have impairment of cardiopulmonary function. Those investigators noted a worse tolerance to maximal exercise testing, lower ventilatory efficiency at maximal exercise, an earlier anaerobic threshold, and a lower normalized maximal aerobic capacity in subjects with scoliosis than in matched non-scoliotic controls. That important study received the Hibbs Award for clinical research at the annual meeting of the Scoliosis Research Society in 2002. The study established that there is impairment of cardiopulmonary function even in patients with mild and moderate scoliosis, necessitating a reassessment of our understanding of and approach to mild and moderate scoliosis as a benign condition. Individuals with idiopathic scoliosis had a significantly lower tolerance to maximal and submaximal exercise but did not exhibit significant cardiopulmonary restrictions.