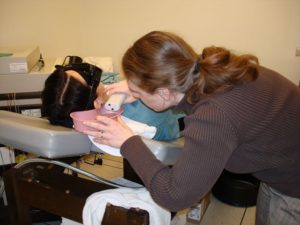 Scoliosis neurological exams may reveal anatomical findings such as; The Chiari I malformation, also known as the Arnold-Chiari malformation, is a relatively common syndrome caused by displacement of the cerebellar tonsils below the level of the foramen magnum. Associated with the Chiari malformation may be hydrocephalus, spina bifida, and syringomyelia. In most instances, symptoms present in middle age. There are hundreds of articles about this well known malformation in the literature (see Pubmed).

In the early 1890s, Dr. Hans Chiari, professor of pathological anatomy at the German University in Prague, used autopsy specimens to describe four congenital anomalies later termed the Chiari malformations (types I to IV). Of these, the mildest (type -I) is the most common one encountered in clinical practice.

Nearly all Chiari malformations are type I. The type I Chiari malformation consists of caudal displacement of the cerebellar tonsils at least 3 mm into the upper cervical spinal canal . This type of herniation may be asymptomatic. The type II Chiari has a meningomyelocele (spinal opening). Type III has an encephalocele. (Ludwin and Norman, 1997)

Cause of the Chiari I malformation

Scoliosis Neurological exams may include MRI usually performed in the upright posture. This test is sensitive for the Chiari malformation is generally thought to be present from birth (although usually nobody knows this for sure). However, rarely mild Chiari malformations may result from low spinal fluid pressure. (Payner, 1994). It seems reasonable to us that Chiari’s may worsen gradually over life, and that a CSF leak might create a Chiari type of MRI picture as the brain droops down.

Rarely there is a hole in the brainstem/spinal cord associated with the Chiari malformation (see picture below). This is called a “syrinx”. A more subtle form of this is a “presyinx”, which is a potentially reversible state of spinal cord edema caused by obstruction to normal CSF flow pathways, especially in the cervical region (Goh et al, 2008).

A closely related condition, basilar invagination may also be congenital or acquired (from arthritis).

DIAGNOSIS OF THE CHIARI MALFORMATION

Often when a person presents to the office with an undiagnosed Chiari, they have dizziness and headaches. This symptom complex triggers off a set of tests for inner ear conditions. During the clinical examination or perhaps on the ENG test, downbeating nystagmus is noticed at some point, and an MRI is obtained (see above). The MRI establishes the diagnosis.

The definitive method of diagnosis is with a T1 MRI scan of the posterior fossa, which documents the typical downward herniation of the cerebellar tonsils. A displacement of greater than 5 mm below the foramen magnum is considered significant. Occasionally Chiari symptoms occur in persons with lessened displacement of the tonsils (Milhorat et al, 1999).  We are very unenthusiastic about surgical intervention in these patients (see later comments about the difference in enthusiasm between surgeons and others).

Curiously, the author has encountered patients from time to time in which the reading radiologist did not notice that the person had a Chiari malformation. In once case, it was a very substantial one. Because of this, we think it is prudent for the doctors who notice downbeating nystagmus on examination, to review the images of their patient’s MRI’s.

Symptoms suggestive of Chiari include posterior headaches, dizziness and ataxia (especially associated with straining), fainting with a cough, and weakness or numbness. A recent review of the otologic manifestations of Chiari in 16 patients indicated that 81% reported episodic aural fullness, 81% tinnitus, 69% vertigo, and 56% flutuating hearing. Headache was also common (about 80%).

Some patients with Chiari develop symptoms (dizziness mainly) on straining.  This pressure sensitivity symptom is also shared by persons with superior canal dehiscence (SCD). Oddly, a recent report suggests that the Chiari Malformation is far more common in SCD (Kuhn and Clenney, 2010) than the normal population. We think that this report is likely due to sampling bias (i.e. this isn’t generally true). Nevertheless, we think it it is prudent to look for Chiari in SCD with an MRI.

Signs of a significant Chiari malformation often include downbeat nystagmus (see above), poor pursuit for age, and alternating skew deviation.

Rebound nystagmus can often be seen with a video-ENG device where the eyes can be vewed in complete darkness.

Occasionally Chiari patients will have sensorineural hearing loss (Hendrix, 1992). Positional nystagmusis common. It is most commonly downbeating or lateral beating.

Persons with Chiari may develop vertigo after spending some time with their head inclined on their trunk. Thus the Chiari can cause cervical vertigo.

In the Dix-Hallpike maneuver for BPPV, this may be recognized by seeing a delayed onset positional nystagmus. This nystagmus can also be looked for more specifically with the “vertebral artery test” — a misnomer in this particular situation.

Other causes of constant downbeating nystagmus that should generally be considered are migraine,paraneoplastic cerebellar degeneration, and anterior canal BPPV.  Generally, the paraneoplastic differential is the most concerning as the nystagmus can be very strong and the consequences of missing a tumor high.  Anterior canal BPPV nystagmus is not a major differential as it is present only lying flat (unlike Chiari). Migraine nystagmus is almost always weak although it is accompanied by headache like Chiari.

Chiari symptoms overlap with those of Meniere’s disease as well as migraine (Sperling et al, 2001)

RISK OF THE CHIARI

A very few individuals with the Chiari malformation develop progresive neurological symptoms. This is most commonly due to an enlarging syrinx — a hole in the spinal cord (see above). In our otoneurology practice in Chicago, it is extremely rare for us to refer patients for surgery. Rather, we generally make arrangements to follow people on a yearly basis.

In our opinion, lumbar punctures, epidural blocks and related procedures that might cause a spinal fluid leak should be avoided whenever practical in persons with known Chiari malformation. The reason to avoid these procedures is that they may worsen the Chiari.

The following are the author’s opinions:

Who should take care of Chiari malformation patients ?

In our opinion, the Chiari malformation is a condition that should be monitored on a once/year basis by a neurologist, and best of all, by a specialized neurologist — an otoneurologist. The reason for this is that while a neurosurgeon may ultimately operate on a patient with a Chiari, the huge majority of patients do not need brain surgery for the Chiari. We are generally unenthusiastic about asking neurosurgeons to make treatment decisions about elective brain surgery, as of course, neurosurgeons are paid to do surgery. We think it is generally better to have non-surgeons decide whether elective surgery should be paid for by insurance companies.

We are familiar with the Chiari malformation in our clinical otoneurology practice.

Services available vary depending upon location and provider. Not all services are available in all Locations. Providers are independent contractors and are not employees of Scoliosis Systems O & P LLC