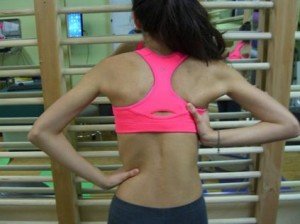 Adolescent scoliosis treatment Protocols -The Spinecor brace if custom fitted and configured specifically for each patient depending upon the location and direction of the scoliosis. Curvatures as small as 10 degrees may be treated at the discretion of the physician or chiropractor. Brace wearing schedules are similar for most adolescence; 20 hours of brace wearing with two breaks separated by 4 hours.  Full time wearing is expected within two weeks of the initial fitting.  length of treatment depends upon when the diagnosis is made. Females typically wear the brace beginning at diagnosis and ending two years beyond their menses, or when the growth plates are completely fused.  Males typically grow up until their 17th year, and may benefit from brace wearing into their late teens.

Treatment Outcomes – The Spinecor brace is the only orthosis which has been reported to permanently reverse the curvature associated with Scoliosis. Due to the ease of use, compliance is much higher with Spinecor, as is psychological well being of patients as compared to those who did not receive treatment, or were prescribed a rigid orthosis.

Treatment Indications – Patients diagnosed with Scoliosis from ages 1 thru adolescence with curvatures measuring from 12-50 degrees at the time of diagnosis are considered candidates for bracing. Candidates with smaller curvatures who are less mature are considered ideal, however, individual cases may be accepted on an elective basis with informed consent.

Contraindications – Neuromuscular scoliosis is considered a contraindication, however individual cases may be accepted on an elective basis with informed consent. Patients who experience significant progression (5 degrees or more) on three consecutive follow up evaluations may also be released from care, however individual cases may be exempt from release with informed consent.

History: Adolescent Idiopathic Scoliosis typically presents at the time of puberty mostly in females.  The likelihood that most curvatures will require surgery is greatly influenced by the amount of patients seeking early intervention.  In my experience, adolescent scoliosis can be successfully managed even when curvatures measure as much as 50 degrees. In curvatures measuring greater than 50 degrees, non-surgical treatment can be effective if the curvature progression can be halted and the patient is willing to be “posture conscious”. The majority of scoliosis surgeries in this age group are done for cosmetic purposes, and often may be unnecessary in regards to quality of life issues.  In fact, studies confirm patients who opt out of surgery often have higher quality of life scores as adults.  This is not to say surgery cannot be the best option for some individuals, but in my opinion, non-surgical approaches such as the Schroth Method and the Spinecor brace should be considered when no other health concerns are imminent.