What is Scoliosis? Most descriptions begin and end with the well known curvature of the spine.  What typically isn’t discussed is the initiating causes and the ongoing influence of the environment. Both the internal and external environment influence the genetic potential of not only scoliosis, but all genetic conditions. Take Diabetes or Heart Disease, you can have  the genetic predisposition for these conditions, but your lifestyle, diet and stress levels influence whether or not the condition reaches is maximum potential. Scoliosis is similar to diabetes and heart disease in that way.  That is why non-surgical scoliosis management is so important. We wouldn’t give a Diabetic patient a “wait and see” option, and scoliosis patients deserve the same consideration. Read more. 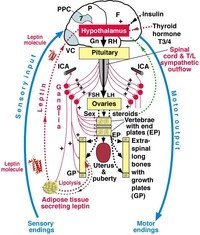 Scoliosis put simply is a small problem is the genetic shape of the spinal bones. Asymmetrical growth initiates the condition, which when left untreated intitiates a cascade of events within the bone and eventually the central nervous system. As the forces of the asymmetrical posture and movement continue to bombard the bone and joints of the spine, the condition becomes progressive. The effects are far reaching. Above is a Fig. from Burwell et al that demonstrates the cascade of events happening in the central nervous system in relation to scoliosis. It is important to understand Scoliosis is more than the hallmark lateral curvature of the spine. It is a neuro-musculo-skeletal condition which worsens when left untreated. Unfortunately the current standards of care call for a “wait and see” approach, and furthermore adult with scoliosis are told there is nothing that can be done to help them .

A review published in 2006 by Dr. Ian Stokes is a good resource for rehabilitation specialists, and highlights how non-surgical treatment of scoliosis can change the natural course of the disease. His conclusion calls for intervention aimed at reducing the biomechanical abberancies without surgery. Research performed by Martha Hawes and others published a study in the Scoliosis Journal which stated in its conclusion that early intervention was the key to correcting the condition. According to their findings, the curvatures that occur early are capable of being routinely diagnosed, before asymmetric loading starts the process causing pathological deformity. 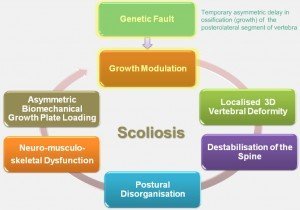 At the time of the publication, and in most cases today, a “wait and watch” approach is taken to determine “is surgery necessary for the scoliosis?” When considering a case of scoliosis, when is surgery necessary? With the introduction of the Spinecor system, effective treatment for patients with scoliosis is possible. This system retrains movement of the spine and reduces the abnormal forces that occur during movement, to prevent the condition from advancing. Hawes believed, instead of waiting for scoliosis to develop into a spinal deformity, and then asking the question “when is scoliosis surgery needed,” that early treatment could prevent patients from experiencing symptoms for the rest of their lives. The publication also suggested that defining patient-specific mechanics of how spinal loading takes place through research could pinpoint the threshold at which the spine curvature was established, making the progression of the curvature inevitable. This would allow strategies to be developed to halt the progression to spinal deformity.

Additional research published in the 2004 issue of SPINE supports the idea that changing muscle recruitment patterns can lead to a reduction in the severity of progression in scoliosis patients, also a result of the Spinecor System.

Deformity of the Ribcage Scoliosis of the spine is a three-dimensional deformity identified by the excessive rotation (curvature) of the spine, along with lateral bending. If the apex of the curve is located in the thoracic spine, the ribcage will rotate along with the vertebrae. This causes the ribs to develop a hump. When these cases of scoliosis are treated, the ribcage will need to be de-rotated, along with the spine, in order to reduce this area of deformity.

Factors Related to Spinal Curvature Some researchers share the belief that the primary cause of dysfunction is from a genetic disturbance during the initiation sequence of growth. They believe that the growth centers within the anterior portion of the spine grow at a faster rate than those located in the posterior regions. This causes the normal side, or sagittal, curves to flatten. A continued delay in the lateral growth centers will cause the bones to buckle and wedge at the apex of the curvature. Making matters worse, muscle spindles are frequently abnormal and, occasionally, absent at the apex level. This reduction in muscle spindle numbers leads to a reduction in awareness and the motor control of surrounding musculature. These conditions lead to brain lateralization which will have a much greater impact than that of postural tone.