Adult Scoliosis is a Problem – Three Reasons Why

Is Adult Scoliosis a Problem? I’ll give you 3 good reasons why it is.

I was taught that Scoliosis is only a problem for adolescents.  But I know and you know that adolescents grow up to become adults, and there are tons of people with adult scoliosis.  But why is surgery often considered the default treatment option when other nonsurgical adult scoliosis treatment alternatives are available?

Hmm? The numbers don’t add up.

It seems that some adults, in fact, the majority of those adults who have scoliosis, developed in adulthood. Demographic studies confirm you are 3 times more likely to develop scoliosis in adulthood than in adolescence!

In fact, some published studies report 1/3 of people over the age of 65 will develop scoliosis secondary to things like osteoporosis, Parkinson’s disease, and arthritis.

The mere fact that more adults have scoliosis than adolescents may be eye-opening to you, but it doesn’t matter much if people are living well with it.

In order for a condition to warrant attention, it has to exact a toll. One way to measure the effects of a disease or health condition is to conduct objective measures of a person’s quality of life.

Standardized questionnaires are widely used in medicine and routinely are reported in the literature. Several of these studies were done with adults diagnosed with scoliosis.

The studies show adults with scoliosis report some of the lowest Quality of Life Scores when compared to patients with other known health conditions.  They even score lower than patients suffering from Clinical Depression.

Nearly 9 million people in the United States are currently suffering from the effects of adult scoliosis, many of them without a clear understanding that their suffering is related to scoliosis.

Reason 3: Scoliosis Surgery Rates are on the Rise

I’m not a conspiracy theorist, nor do I think medical professionals are somehow plotting to ruin the lives of millions of Americans, But I do believe that money blinds. And I believe adult scoliosis surgery is necessary for hospitals to be profitable. There’s also the old adage: “To a Hammer, everything looks like a nail.”  It’s natural for a surgeon, a hospital, and an industry to look at adult scoliosis as a surgical problem when everything they see is viewed through a surgical lens.

With the amount of new braces on the market, and the attention being given to scoliosis by the chiropractic profession, pilates/Yoga instructors, Schroth Therapists, and the like, one would think surgical rates for adult scoliosis would be declining.  But unfortunately, adult scoliosis surgery is at its highest rate in over a decade, and it’s increasing every year. 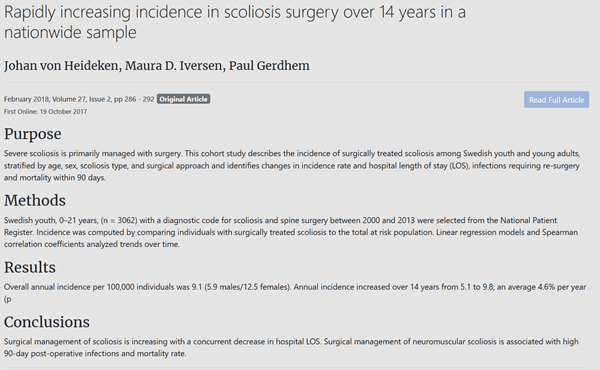 In fact, a study published in the European Spine Journal in October of 2017 reported 14 consecutive years of increases in the incidence of adult scoliosis surgery.

I’m not surprised that surgeons recommend surgery, but I am concerned over the ever-increasing rates of adult scoliosis surgery in spite of the increasing effectiveness of nonsurgical approaches.

Here’s the problem; surgeons should not make non-surgical recommendations.  I was taught that if a patient requires a consultation with a surgeon, to refer them to the surgeon. I wouldn’t recommend which type of surgery a patient should get, or even if surgery is a good idea for them, I let the surgeon do the consult and let the patients decide what’s best for them.

But unfortunately, many surgeons don’t have the same hesitation to comment on non-surgical recommendations.  This is often in spite of the fact that they typically have absolutely no experience or training in the field.

When a surgeon suggests there is “no evidence”, or something non-surgical doesn’t work, they are in fact speaking from experience.  But the problem is that this is misleading since they have No Experience.

Even the recommendation of surgery after a curvature is measured to be 45 degrees should be questioned.  I looked into the basis for this recommendation since I need to know if I’m putting my patients at risk by helping them avoid surgery.

On the surface it seems reasonable, but what if those patients had undergone successful non-surgical care, stabilizing  their condition?  We know that happens in some cases, no one will dispute that. So if we followed the policy recommendation to require surgery after 45 Degrees, many unnecessary surgeries would take place, and in fact, that is exactly what is happening.

When surgery is recommended for adult scoliosis based on a two-line measurement on an x-ray, NO consideration is given as to the nature of the curvature:

When I teach courses to other doctors, I put up an x-ray showing a scoliosis of 95 degrees, I ask the learners, “who would recommend surgery for this case?”  Most of the doctors strongly voice their opinions on how surgery is the only option, and in fact, the only ethical thing to do; until I reveal the x-ray is of a cadaver.  The point is, surgery is not automatically necessary just because you measured a curvature on an x-ray.  Even in the living, surgery is a choice and quite often the wrong choice.

Revision surgery is done usually following a failed back surgery or as a result of the effects of aging on a spinal deformity.

Of the 166 patients reviewed, 107 were diagnosed with “de novo Scoliosis”, meaning they developed scoliosis in adulthood, matching the statistics I quoted initially.

At Scoliosis Systems LLP we pride ourselves on offering EVIDENCED BASED care for adults with scoliosis. We are certain the majority of the 9 million adults with scoliosis can and ARE living their best life without surgery. Even those who have had surgery are in need of ongoing scoliosis-specific healthcare.

I consider myself a guide for those who are seeking truth in the Scoliosis healthcare space. If you are on a journey and our paths cross, you can count on me to shine light whenever I can.

If you have questions about your specific situation, please take advantage of our Free Phone Consultation offer.  You can book your free phone consultation on our home page.