Do you have one or more of  the following; Scoliosis, Osteoporosis or Vertigo?  Clinicians and Researchers have long reported that all three of these conditions can occur simultaneously. And now, new research may answer at least in part why patients with Scoliosis also have Osteoporosis and Vertigo.

In 2006 researchers published a report identifying Osteopenia (Lower than normal Bone Density) as a risk factor for Scoliosis progression.  The authors state scoliosis is primarily a problem with the formation of normal bone, not from an imbalance of muscles or misalignments of the spinal bones.  Furthermore, they were able to show the worse the bone quality, the worse the scoliosis became.  As you probably know, Osteopenia is the precursor to Osteoporosis and is common in peri-menopausal women. What was striking was that the researchers found osteopenia in the adolescent participants. Now it’s not appropriate to say adolescents have osteoporosis, since they aren’t necessarily losing bone minerals, but instead may have never mineralize bone properly in the first place. This is an important distinction which changes the target of treatment. In adults with Osteoporosis, scoliosis can occur spontaneously. Often these patients experience pain that worsens with time. As we age we tend to lose bone density, and the spine becomes more unstable.  Adult Scoliosis can emerge and worsen rapidly.  In Adolescence it’s a tad different. Adolescent Scoliosis is initiated genetically, but may progressively worsen if bone mineralization is not improved.

In summary of the above, Scoliosis progression is a result of either too little bone mineralization, or as a result of too much bone loss.

So Why do we see Scoliosis and Vertigo Coupled Clinically?

Vertigo or Vestibular disorders known as Benign Paroxysmal Positional Vertigo or BPPV have long been a reported problem in patients with Scoliosis (Baron 1952).  There are many types of vestibular imbalances, with the most common being the type related to calcium carbonate crystals that dislodge within the inner ear and aggravate the position sensitive hair cells within.  BPPV typically affects older people and results in dizziness that is position dependent, which resolves when the position is changed.  It’s typically diagnosed by provoking the symptoms while bringing the patient through a series of test positions while they wear infra red goggles so the clinician can observe the eye movements in the dark. 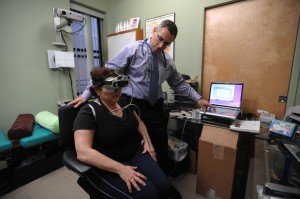 Interestingly enough, it has been extensively reported in the literature there is an increased incidence of Osteoporosis and Osteopenia in patients with BPPV, which is highly suggestive BPPV is also a disorder of bone turnover.

In May of 2017, Lee and associates published a paper which may provide the unifying theory we’ve been looking for.  The study took 5 years to complete with 132 patients suffering from benign vertigo or BPPV.  Based on the bone density testing (Dexa Scan), patients were separated into 3 groups of bone mineral density (BMD) and compared to normal age matched controls. Blood was drawn and markers of bone turnover like Alkaline phosphatase and Calcitonin were measured. Minerals such as calcium and Vitamin D were also measured and statistics were applied to the results. Vitamin D deficiency was found to be a significant marker for BPPV and Osteoporosis suggesting Vit D deficiency is a likely factor in the two conditions.  Together these studies unify Scoliosis, Vertigo and Osteoporosis as conditions of Bone remodeling.

They offer strong evidence scoliosis progression is a metabolic condition and cannot be treated solely from an Orthopedic standpoint. Blood testing and Dexa Scans can help the well rounded clinician offer comprehensive metabolically based care that offers true change at a metabolic level.