Should my child participate in Sports if they have scoliosis?

I recently interviewed a new patient and her family to find out her parents were encouraging her to join sports because she had recently been diagnosed with scoliosis. This is not uncommon in my practice, nor is the exact opposite, parents and doctors recommending no sports when curvatures become progressive. So which is it? Should children with scoliosis participate in sport or not? The first question that should come to mind is, what makes scoliosis curvatures progress?  This is very important to understand; genetics cause the disease, and the environment is responsible for its progression. For our purposes, the “environment” is both internal (metabolism) and external (movement).

With that being said, here are few things to consider, firstly not all movement is created equal.  If you think about “movement” as a large circle, then exercise is a smaller circle within that. Poor movement as well as poor postures have the potential to aggravate scoliosis, and to the contrary, movement can also be therapeutic, as is the case with good posture. Exercise is really no different, if the movements associated with the exercise are therapeutic or helpful then exercise is great, if the movements are imbalanced, limited,or  unstable, then the exercise may aggravate the condition.  We spend between 10 and 30 hours working on movement education with our patients. “Movement”includes exercising, as well as walking, running, stepping, sitting, standing, breathing, leaning, chewing, sitting, kneeling, lying etc.

Furthermore, exercise activates the sympathetic nervous system. Anytime you move, your sympathetic system has to dominate to bring blood to the muscles doing the work. When the sympathetics are dominating, the adrenal glands release cortisol, the heart rate becomes less variable, and digestion shuts down. Normally, the sympathetics are opposed by the parasympathic division of the autonomic nervous system, and the body returns to a state of resting and digesting. If a patient has a dominant sympathetic nervous system, it may be turned off after exercise, and lead to problems falling asleep at night (insomnia), they may be anxious, have tachycardia, have increased sweating, and decreased digestion to name a few. This is a major concern for scoliosis patients. Here’s why.

Heart Rate Variability (HRV) is a measure of the balance of the sympathetic and parasympathetic influences over the heart. When the sympathetic system is dominating, the heart beat becomes less variable, meaning its rhythm becomes like clock work. This may sound good, but it’s actually not desirable because it makes the heart more susceptible to mis-beat.  Studies show when athletes over train their HRV diminishes.  Heart rate monitor technology allows us to easily measure the HRV allowing us to recommend rest days when exercise is leading to over training.

What is Hypothalamic Amenorrhea and how does it affect Scoliosis?

Studies confirm prolonged onset of the menstrual cycle is a risk factor for scoliosis progression. Termed Hypothalamic Amenorrhea, abnormal menses or lack menses can be caused by a lack of adequate body fat. This may be due to genetic predisposition, or due to either excessive exercise or low caloric intake. It’s important to understand why this happens. To put it simply, if the brain (hypothalamus) does not detect enough fat storage (Leptin signaling), it won’t waste energy on preparing the body for pregnancy.  This can prolong the pubertal growth making these patients more susceptible to asymmetrical bone growth.   Dietary and lifestyle changes should be considered in these cases. Supplementation that supports proper hormone function may reduce physiological dysfunctions associated with this condition.

Does my child have Neuro-skeletal Scoliosis?

Neuro-skeletal scoliosis is a relatively new description which describes the pathophysiology of a particular type of progressive Scoliosis. (Neuro) meaning, under the influence of the nervous system, mainly the autonomic nerves which get their start in a part of the brain called the hypothalamus, and (Skeletal) pertaining to the growing bones, nerves and blood vessels all of which are involved in scoliosis.

The Hypothalamus is responsible for regulating our bodies homeostasis,  which includes temperature regulation, feeding, satiety and hormonal balance. The Hypothalamus has direct links to the pituitary gland which is responsible for the onset or puberty and hormonal maturation. Nerve pathways from the hypothalamus follow along the sympathetic nerve chains to synapse on bone cells called Osteoclasts and Osteoblasts. Both of these cell types work to grow and remodel bone based on genetic coding, local sheer forces and neuropeptides directly from nerves.

Other Facts to Consider: Neuropeptides are tiny molecules produced and released by the nerve fibers as a consequence of local and global activation. Both Sensory nerves and motor nerve function influence bone symmetry and growth especially in adolescence. Global motor tone of the nervous system has influence over bone symmetry via the pontomedullary reticular formation (PMRF) pathways, which also influences vestibular function Heart rate and rhythm, sympathetic inhibition (sweating, pupillary dilation, and regional blood flow).

Why is it important to know if my child has Neuro-skeletal Scoliosis? When nerve function is disrupted, imbalanced or left uninhibited, or overactive, it results in asymmetry of bone growth and progressive scoliosis. Many of nerve imbalances can be improved, reduced or balanced by functional neurology approaches, physiotherapeutics and chiropractic methods.

How is Neuro-skeletal Scoliosis Diagnosed? A thorough clinical neurological exam may reveal neuro-skeletal motifs that can be treated clinically. Basic exams should include testing of: a. Reflexes b. Vibratory sense c. Ability to measure movement of the limbs d. Sensory appreciation of space, e. balance etc.

When Neuro-skeletal scoliosis is suspected, a more thorough exam should include:

6. EEG when cortical syndromes are suspected.

What Treatments can be done if Neuro-skeletal Scoliosis is confirmed? Treatment objectives should be discussed with your clinician about your child’s specific condition. A multi-disciplinary approach may be necessary. In general, when patients have vestibular imbalances (studies show this is prevalent in 80% of Idiopathic cases), patient specific vestibular rehabilitation should be performed by a trained professional. That same patient may have neuro-hormonal issues, and may require care from an endocrine specialist. It is our opinion, a Functional Neurologist is the best managing clinician for these types of cases, however doctors of chiropractic and non-surgeon orthopedic specialists are often needed and therefore are also valuable in this regard.

Dr. Deutchman has been in private practice since 1986. His dedication to service is evident in his actions; in the early 90’s, Dr. Deutchman initiated and went on to manage volunteer chiropractic care programs for orphaned infants at the Hale House in NYC, as well as a program for priests and nuns of the Fratenite de Notre Dame, a French missionary group that maintains orphanages and soup kitchens around the world. In 1999 he provided chiropractic services to the Mens-Health Crisis in New York City. He continues to advised many chiropractors around the country about establishing local volunteer chiropractic care programs as well as serving as an educator for post graduate studies in Scoliosis. Dr. Deutchman served as district President of the New York Chiropractic Council for Manhattan from 1992 to 1994. In 2003 Dr. Deutchman formed the Scoliosis Care Foundation, a non profit organization dedicated to educate parents on the benefits of early detection and correction of Scoliosis;  In 2004, he was invited to St. Justine’s Hospital for Children to train and share ideas with the developers of the Spinecor brace, Dr. Christine Collaird, and Dr. Charles Rivard.

Today Dr. Deutchman is a provider for the Nationally recognized Scoliosis Systems (TM) program for the management of Scoliosis. He continues to be instrumental in developing non-surgical adult Scoliosis protocols utilizing postural reeducation techniques and the Spinecor brace. His ability to problem solve and his unmatched experience with difficult cases, makes Dr. Deutchman one of the World’s experts in alternative Scoliosis treatment for both children and adults.

Dr. Deutchman is also a Founding member of the International Society of Scoliosis Orthopedic Rehabilitation (SOSORT)

Scoliosis Analysis should include imaging of the spine and posture. Our Doctors offer a completely radiation free option scoliosis analysis. We offer Raster Stereography seen above in all our Satellite locations.

Reducing exposure to ionizing radiation is something we take very seriously. Today we can image the spine using Stand Up MRI technology and posture imaging systems like the Diers Formetic Scanner. When x-ray is used we routinely use breast and gonadal shielding as well as high frequency digital radiography. 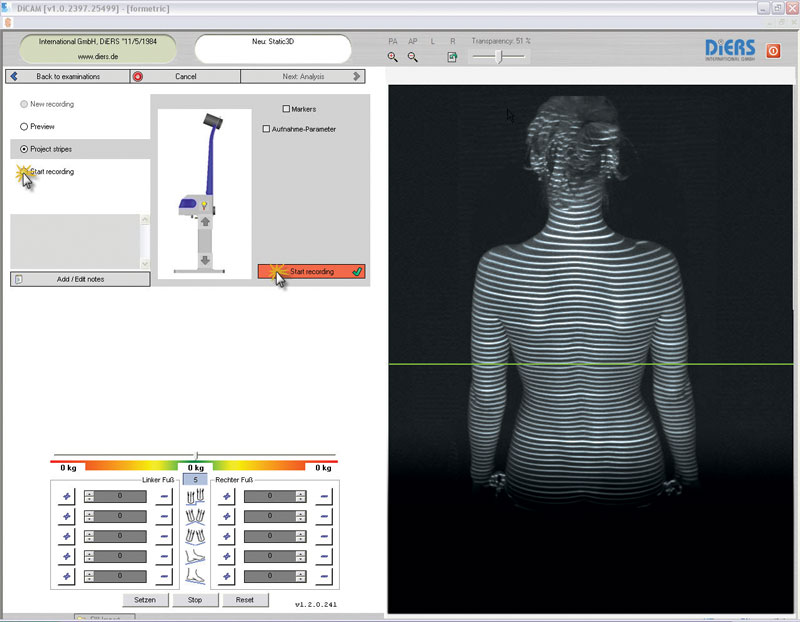